Ladies' Man:
The Life & Trials of Marvin Mitchelson
Publishers Weekly
Journalist and author Jenkins ( The Litigators ) masterfully recounts the life of Mitchelson, "divorce lawyer to the stars." The famous Hollywood attorney resembles a Dickensian figure, but one who alarms instead of amuses. A poor student who squeaked past the bar at age 29 in 1957, within 10 years Mitchelson was winning multimillion-dollar divorce settlements for Pamela Mason, ex-wife of the actor James, and other famous folk. The lawyer prospered through the years and his reputation grew, particularly when he represented Michelle Marvin in her palimony suit against actor Lee Marvin, settled in 1979. Recently, however, Mitchelson, accused of defrauding clients, drug addiction, rape and other sexual crimes, has been forced to defend himself. That is now the main concern of the man who agreed with Dickens's Mr. Bumble that "the law is a ass!"--and often proved it. Continue reading...
Library Journal
This unauthorized biography chronicles the humble origins, rise to fame, and relentless quest for publicity of Marvin Mitchelson, dubbed the "Prince of Palimony" for successfully obtaining legal protection for live-in lovers. Mitchelson's most famous cases--Michelle Marvin, Pamela Mason, and Joan Collins--are detailed, as is his appearance before the U.S. Supreme Court. His hushed-up problems with the Internal Revenue Service over tax evasion, his cocaine use, and charges that he has raped clients are all carefully documented. Written by a journalist and author of The Litigators ( LJ 4/1/89), this is a surprisingly believable and engrossing account intended for the lay reader.
Kirkus Reviews
Jenkins (The Litigators, 1989) offers a breezy, gossipy, and fast-paced treatment of the controversial divorce-lawyer's larger- than-life legal accomplishments and personal foibles. Marvin Mitchelson, long a renowned L.A. practitioner, achieved national fame when he represented Michelle Triola Marvin in her ``palimony'' suit against actor Lee Marvin. Jenkins relates how this case set an important and novel legal precedent that had a national impact on matrimonial law. He doesn't dwell on the arcana of divorce law, however, but devotes most of his account to Mitchelson's personal antics--brazen trial tactics, alleged sexual exploits with clients, drug abuse, financial difficulties, and problems with the California State Bar. Drawing on interviews with friends, adversaries, and clients, Jenkins loads his text with quotes, particularly from lengthy interviews with Mitchelson himself--who emerges as a complex man and a superb trial lawyer with a strong desire to be an insider in the heady social world of Hollywood. The constants of his public persona seem to be his demands for publicity and money, which he pursues by representing high-profile clients, winning high-stakes trials, arguing important appeals in the Supreme Court, and living an ostentatious life: Mitchelson is now as famous as the show-biz personalities he represents. A light, diverting, and evenhanded treatment of a modern legal celebrity. Continue reading...
Buy the book:   Amazon  |  B&N 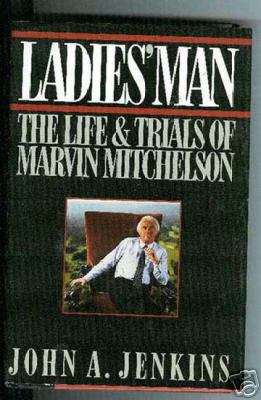